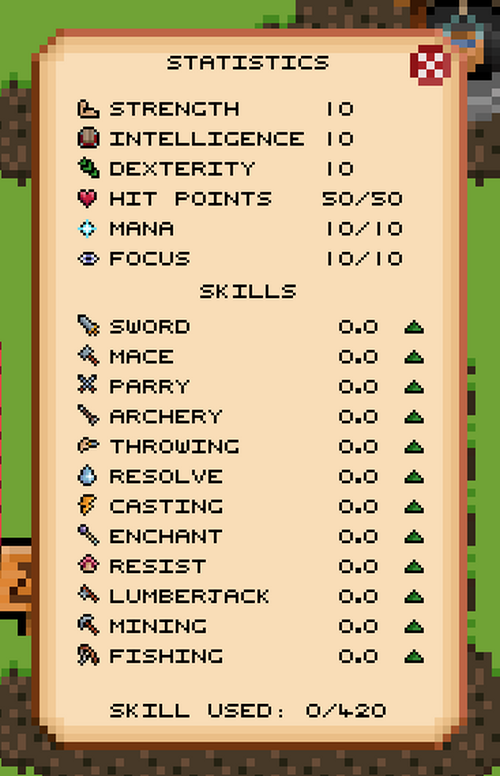 It's been a while since an update. That's partly to do with a big released I was working on - which I'll create a post about shortly - but also because I've been on holidays to sunny (and extremely hot) Cornwall. I actually completed the work for the release just before going away but I didn't want to leave you guys with a potentially broken update - so I didn't actually roll it out to the main server until today.

One of the big changes in the new release is the way characters develop in the game. Originally I was going to go for the traditional experience points from each kill, eventually resulting in increasing levels and in turn allowing access to better weapons, items and armour. This worked really well in Legends of Yore but as I started building it out in Tales it "just didn't feel right". Something about the multiplayer nature made me want to do a bit more this time.

I played a few MMORPGs in my past, Ultima Online, Tibia, Dark Age of Camelot, World of Warcraft and Guild Wars are the ones that come to mind. To me it always felt like UO got it right with respect to character development - so I'm going to model what I do on that. The base constructs are Skills (things you learn to do) and Statistics (character traits that improve as you exercise them)

As you can see there's a range of skills and statistics already defined - though I expect the skills list to grow over time. Statistics aren't directly trained, they go up as a result of training skills.

For instance, if I fight with a sword I'm going to gain more skill with the sword. I'll also gain strength since I'll be swinging a sword around. If the weapon I'm using allows me to parry (to block an attack with a weapon) then I'll learn the parry skills as well. Equally if I was casting spells my casting skill might go up, along with the intelligence that I'm using to channel my magic into the spell.

So, how does that effect things?

Hopefully, it follows logically - if I get more skill with the sword I'm more likely to do a higher attack with a weapon. If I'm stronger, then each blow might do a bit more damage. It also might take a certain amount of skill or statistic to wield a weapon, e.g. it takes sword skill 2 and strength 11 to wield a broadsword rather than the pig sticker you start with.

What stops me becoming 100% in all skills?

Thats the neat bit, you only have so many skill points, this represents your capacity to learn and hold knowledge. Once you reach your skill point cap you can only learn one skill by unlearning other skills. The little arrows on the right of the dialog allow you to control which skills you're trying to increase, keep or reduce to allow you to learn something else.

The whole idea here is everyone starts equal - no knowledge, basic weapons and little to no armour. How you play and what you focus on change your character into an expert archer, a mighty wizard or even just a fantastic cook!

Feedback is really welcome. I'll follow up with an update on the whole release.

@cokeandcode, I love this system. It already feels rewarding while playing :) I can't wait to see more!